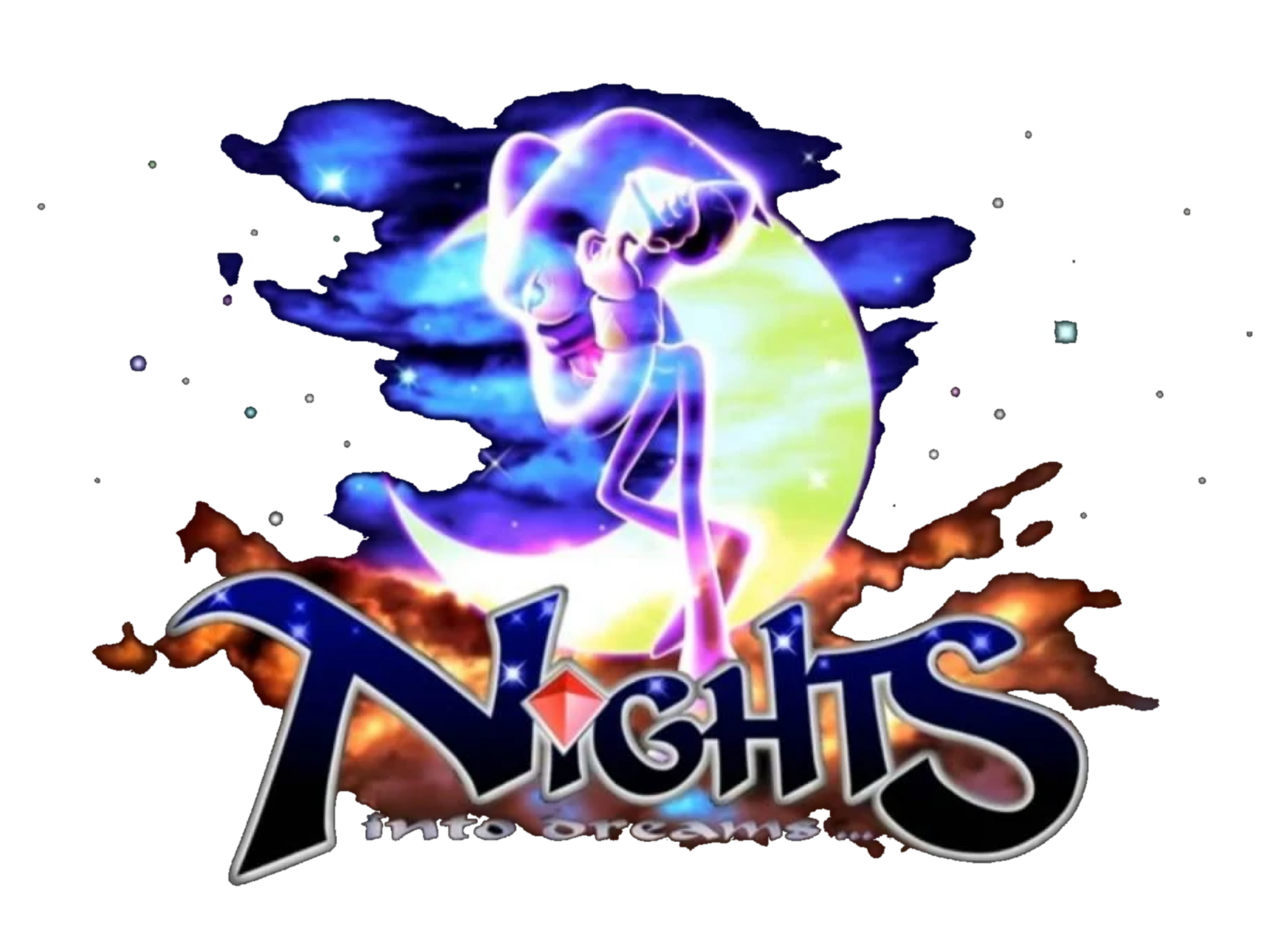 GATE OF YOUR DREAM

Nights into Dreams is an action game developed for the Sega Saturn, but has since received HD releases for the PS3, XBOX 360, and Windows. The story follows teens Elliot and Claris as they explore their dreams alongside the "Nightmaren" NiGHTS to overcome their fears and save the world. The gameplay consists of flying in a predetermined route in "2.5D", using 3D graphics in a way that resembles a 2D side-scroller. When playing as the human characters, they're able to explore the map in 3D. There is also an ai component called A-Life, which was the base for the Chao Garden in Sonic Adventure/SA2.

I grew up playing NiGHTS Journey of Dreams, this game's sequel, on the Wii. That game explained everything really clearly, so when I got the chance to play NiD, I wasn't able to beat any levels because I didn't know what I was supposed to do.

Since NiD has no dialogue nor instructions on how to play within the game (which was typical for games from this time), the following sections will cover information about the characters, story, and how the core gameplay works to make the game less confusing for newcomers. The information is based off of both the US/EU and translated JP manuals, and I will link resources I use at the end if you're interested in learning more!

Elliot is considered very intelligent and faultless in all that he does, especially in school. In the face of a challenge, he always tries his hardest and comes out on top—especially in his favorite sport, basketball. He is well respected among his classmates and the object of everyone's adoration. Because he is so well known, however, the respect he's earned can quickly be redirected towards anyone who bests him...

That night in his sleep, Elliot's dreams are a repeat of an incident that happened the same afternoon. Elliot was out enjoying a basketball game with his friends, as usual. Then suddenly, an older student's group intrudes, stealing their ball with the greatest of ease. The loud slam dunk put an end to the day, and his respect. The ball is thrown into Elliot and the court seems to melt away. All at once, Elliot remembers the anger of his humiliation over and over again. He is playing against someone he can never hope to beat, his pride keeping him from acting awkward. He stands alone in silence, hiding his shame behind a poker face.

Since Claris was born into an artist's home, being creatively gifted was something expected of her. She's spent her life dreaming of standing on stage in a musical, so she can prove to her family that she has stage talent. However, Claris has always stood in the shadows of others, far too shy to prove herself onstage. With the Twin Seeds City holding auditions for the headlining musical in their centennial celebration, she finally gets the chance to fulfill that dream...

She had already passed a brilliant primary examination. The second audition came that day. Claris was completely overwhelmed by the size of the stage and the force of the hot spotlight in which she stood for the first time. Her knees began to wobble, her throat became dry, her voice became husky. The spotlight was so bright it became impossible to see the very judges watching her. Although she would have to wait until the evening for the audition results, poor Claris had completely lost hope. She felt she had lost her dream. She fell into a deep sleep, exhausted from the audition. She tried to forget about all of it, but her situation mattered more to her subconscious than she thought. Soon, her fears were being played out in her nightmares.

NiGHTS, a being capable of flying freely through the sky and performing aerial acrobatics, is a 1st level Nightmaren created as Wizeman's right hand man. Having the craziness of the original Nightmaren, this individual's free spirit suffers much misfortune. Because they wish to have free will, NiGHTS rebelled against Wizeman, and was exiled in an Ideya Palace as a result. Will the day come when NiGHTS will be released from Wizeman's prison and be free to fly the skies again?

A very cheerfully, innocent, race inhabiting Nightopia, the world of dreams. They love having a good time, which they do by showing passing visitors fun dreams doing things like singing or dancing. It's just in their nature to do whatever they can to let visitors enjoy themselves!

Nightmaren are beings created from Wizeman's soul, with the purpose of destroying Nightopia. They are divided into 3 tiers, with level 1 having superior flying abilities and being able to paraloop, level 2 being bosses, and level 3 being standard enemies. The following characters are level 2 Nightmaren, save for Reala who's level 1 and Wizeman who's the final boss, but all 7 are stage bosses. The player underneath each boss plays their theme!

THE DRAGON GAVE A LOUD SCREAM

SHE HAD LONG EARS

That night Elliot and Claris return home, thinking of themselves as failures, not realizing that the real challenge is about to begin. In the world of Nightopia where our dreams are played out, an evil being is gaining tremendous power. He is Wizeman the Wicked, and through his creations the Nightmaren, he captures dream energy, called Ideya, from humans. If he is not stopped, he will rise from the subconscious and enter our world.

As Wizeman's Nightmaren start fulfilling his horrible plan, a Nightopian begs the sleeping Elliot and Claris to save the world from the evil being. Just a few moments ago they felt like total failures. but now that the world needs their help, Elliot and Claris feel, for the first time in their lives, courage growing within them. They accept the Nightopian's desperate request.

The creature explains to them that they need to recover four types of Ideya from Wizeman's Ideya capture, a group of large machine-like beings. The four energies are
Purity, Wisdom, Hope, and Intelligence.

Wizeman will attempt to steal Elliot and Claris' Ideya by placing them in strange dream worlds developed from the depths of their minds. The fifth and rarest Ideya, Bravery, is the only type of energy Wizeman cannot steal. It is said that the only one not yet under Wizeman's power is NiGHTS, who is attracted to red Ideya. The Nightopian believes that Elliot and Claris possess this energy, and thus NiGHTS will come to their aid.

The Nightopian warns that sooner or later Wizeman will send the most powerful of his Nightmaren after Claris and Elliot. The two children will need the help of NiGHTS every step of the way to thwart Wizeman's plans if they are to restore peace to Nightopia.

At the start of the dream, some level 3 Nightmaren steal almost all your Ideya, except for your red one. To start the stage, walk into the nearby Ideya Palace to dualize (fuse) with NiGHTS. Each dream has four Mares (stages). For each Mare in NiGHTS you need to collect 20 Blue Chips and take them to the Ideya Capture, which guards one of the types of captured dream energy.

Once the Ideya Capture disappears, you'll enter bonus time. In bonus time, all Blue Chips will turn into Gold Chips, which are worth way more points. Use as much of your bonus time as possible to collect these, because the amount you get determines your ranking. Getting a good rank is important because you need to get at least a C rank on all previous levels to unlock the last dreams of the game. You can fly over the Ideya Palace during bonus time for items in the Mare to respawn. You will go to the next Mare as soon as you enter the Ideya Palace.

Should the timer reach zero before you finish the stage, you will fall to the ground as Claris or Elliot. You'll have to avoid Wizemans alarm eggs, which will trigger a Night Over if they catch you. An arrow will help you navigate to where you need to go to complete the stage, and you can stun alarm eggs by jumping on them if they get too close.

In the last stages of the game, items do not respawn and your timer is not restored when going to the next Mare. To get a good rank, you'll want to finish as fast as possible.

After you finish the last stage of a dream you are transported to Nightmare, where you battle one of Wizeman's henchmen as NiGHTS. To beat these henchmen, you have to figure out their weakness (or look it up lol) and use it againt them. To get a good rank, you'll want to beat the boss as fast as possible. If you run out of time, you'll have to start the entire dream over again (including the previous four Mares, yeah, it sucks).

The Unofficial NiGHTS Fansite is the best site to learn more about NiD as they have information on characters, stages, official/fan artwork, and community projects! I based the character bios I wrote here based off of the JP manual translation they've uploaded.

Info used in Story and How to Play was from the US NiGHTS Manual, which is really good for learning game moves, controls, and navigating the UI.

Character sprites are from Sonic Pinball Party because I think they're really cute (if you wanna see the actual game art you'll just have to look at the NiD Fansite :P).

Also thank you KetDarkDragon for getting good enough at sonic pinball party to rip the Wizeman sprite!

Assets from the page before this are from the NiD GBA Score Attack Minigame (here and here).