Since this zine submission was written by two people, text written in rocktype's point of view will be purple, and text written in slimemagus' point of view will be green. Some context: slimemagus really likes RPG Maker horror games, but rocktype had only watched a playthrough of Witch's House prior to deciding on this hall-o-zine topic. We decided to have rocktype play all of these in order to help write the zine. I don't do well with jumpscares, but I found that these games weren't too scary for me. If you usually don't do well with horror, you may have an easier time with these games!

What are RPG Maker Horror Games?

RPG Maker horror is a subgenre of horror where all the games were made using an RPG Maker engine, which lets people make rpgs by providing tools for map-building, making battles, and scripting events. While games typically aren’t defined by the engine used to make them, RPGMaker horror games have many consistent traits.

Some things this subgenre is known for is:

These games were originally only available in Japanese, so it’s thanks to translators like vgperson and memories of fear that the RPG Maker Horror genre was able to reach a larger audience. These translators host their content on a static site and forum site respectively, so the old web continues to play a role in making these games available for people online!

As said in the intro, we played some notable RPG Maker Horror games in order to give some info on them for people who are interested in playing some! The following sections are spoiler free, but some screenshots will be provided. The download links to the games will be at the end of each game’s section, and clicking it will provide more info about the synopsis, characters, and content warnings. Some well-known games we didn’t get a chance to play are Mad Father, The Crooked Man, Angels of Death (this one costs money, but has an anime), and Purgatory, but many more can be found on the translation sites above.

If you’re too scared to play horror games (which is totally understandable) there are many RPG Maker games that are adventure games with horror elements, with Alicemare being one of my favorites, and another example being END ROLL. 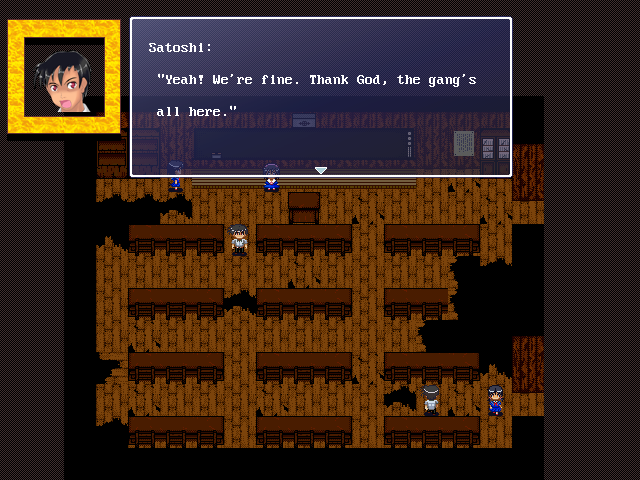 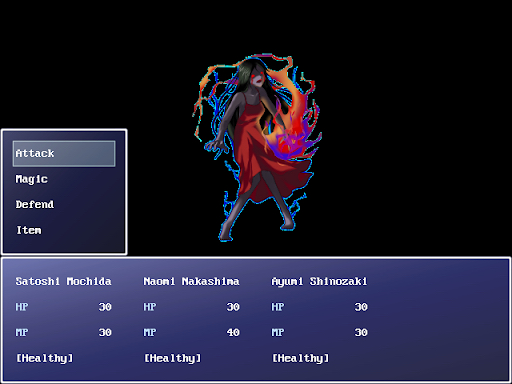 CORPSE-PARTY -Rebuilt- is a remake of CORPSE-PARTY (1996) that was made on a more recent RPG Maker engine that runs on modern computers, but has remained as faithful to the original game as possible. It follows protagonist Satoshi Mochida and his friends as they try to escape an abandoned school they got trapped in by a vengeful ghost.

Since it’s the oldest notable RPG Maker game I could find, it’s a lot simpler than later games. That said, it does have fan games which can also be found on memories of fear. It also got two remakes down the line, the second of which (Corpse Party Blood Covered: Repeated Fear) was released internationally and is the version of the game most people know about.

If you’re interested in playing, more info can be found here! 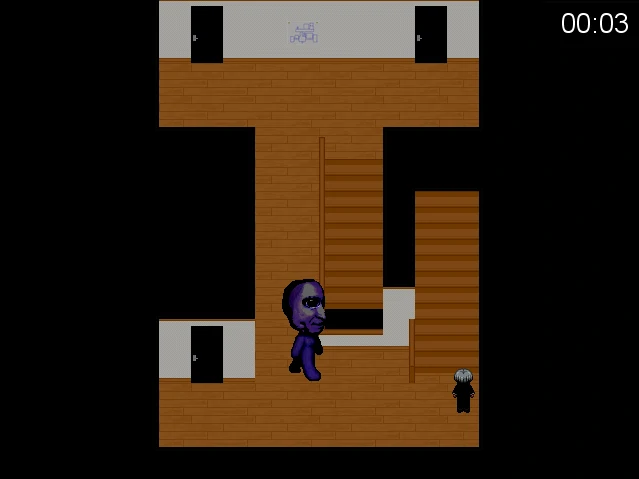 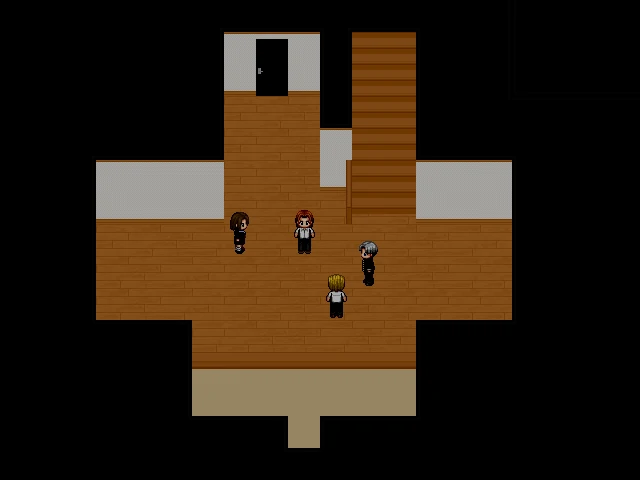 Ao Oni is about four students who enter a mansion that’s rumored to be haunted. They go inside together to investigate but are soon separated and hunted down by a terrifying blue monster (that’s honestly pretty funny looking until it starts chasing you). It has gotten several updates over the years, with each one having varying characters and dialogue, but the core gameplay is always the same. Ao oni also inspired its own sub genre, the oni genre. Many fangames have spawned following the same formula of chases, hiding, and puzzles.

To download the most recent version of Ao Oni, click here! Older versions can be found on the memories of fear forums. 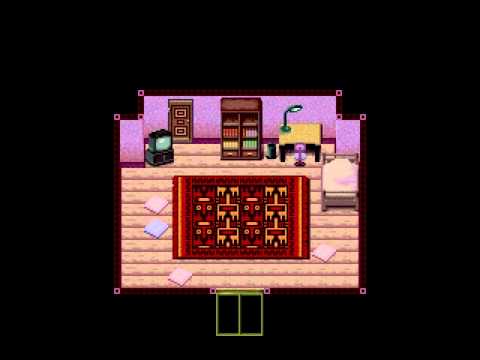 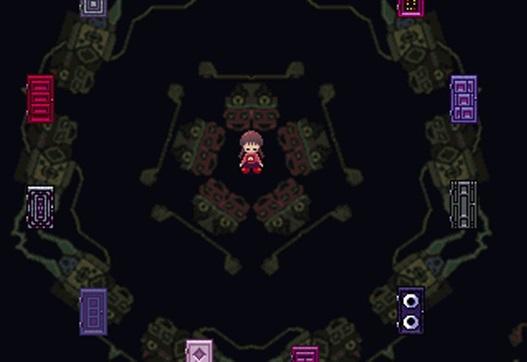 Yume Nikki is a surreal horror adventure where you play as a little girl named Madotsuki and experience all the weird stuff in her dreams. I'm kinda bad at figuring out how to use the items so I haven't finished the game at the time of writing this, but I like how funky a lot of the areas look! It’s one of the most well known games on this list, and the ending is so open-ended that people have argued over what they thought the game was about for years.

Yume Nikki is available for free on steam! 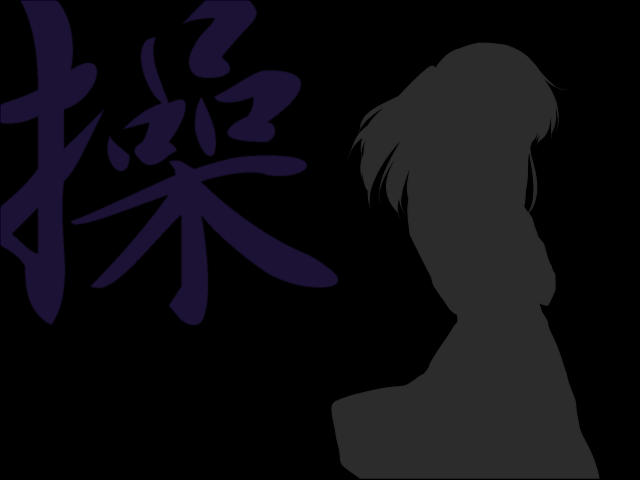 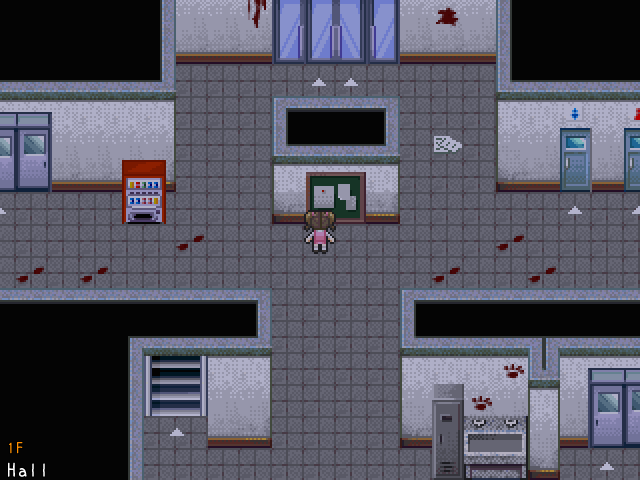 Misao follows a high schooler named Aki three months after the disappearance of her titular classmate. No one has any idea what happened to Misao, but when all of her classmates get trapped in a cursed version of their school, rumors spread that she’s out for revenge. This one is one of my favorites because the deaths being funny made the game way less scary for me.

The free version of Misao and more info about the game is available here. A $5 remaster of Misao with extra content is available on steam. 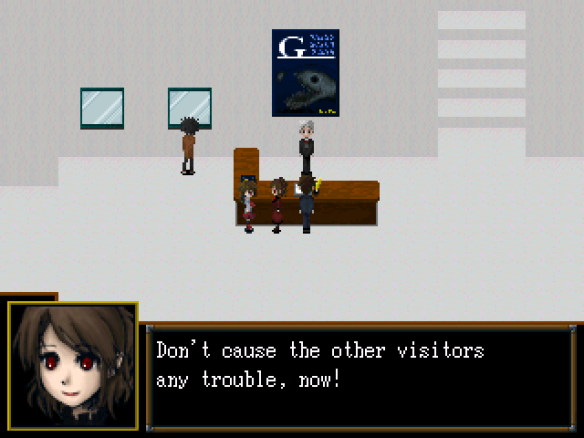 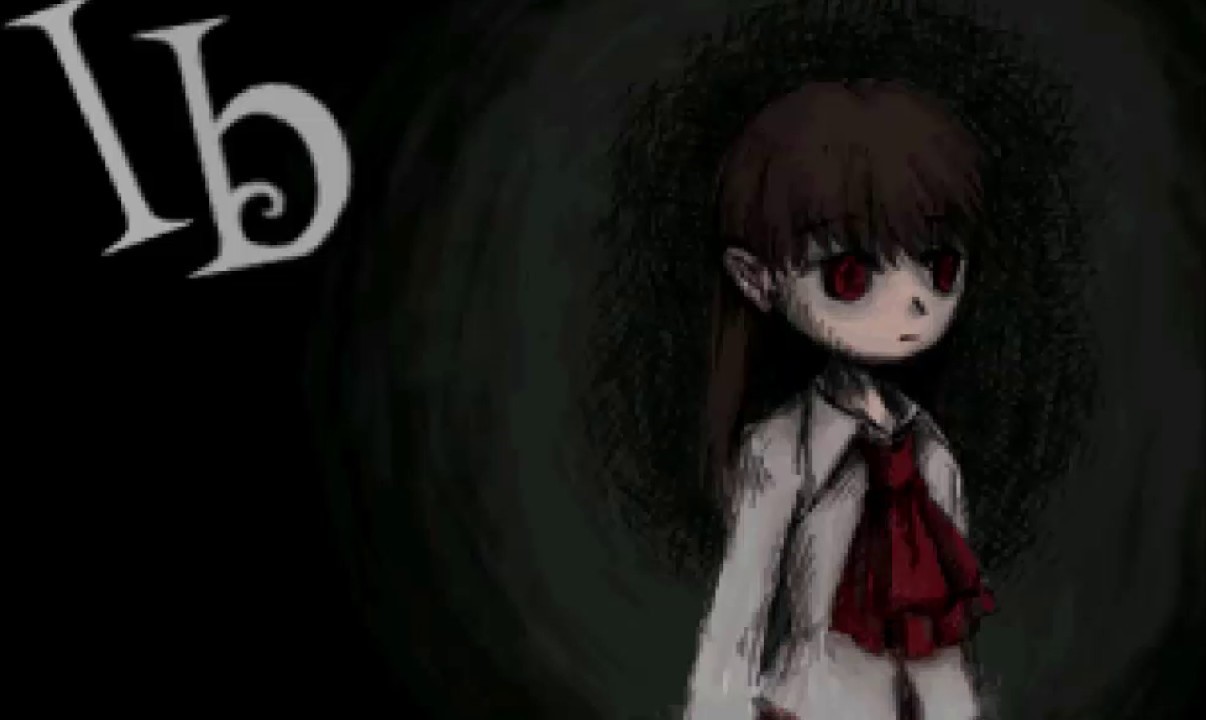 Ib follows its titular protagonist through an art gallery dedicated to the late artist Weiss Guertena. However, things take a turn for the worst as Ib finds herself alone and endangered by the artwork around her. This is definitely my favorite RPG Maker horror game because I really love the characters, the atmosphere, the symbolism, and the story. Getting to know Garry and Mary, the two npcs in the game, is optional but I think they’re both worth talking to! A paid remake is currently being made by Kouri to be released next year!

More information about this game and the download link are available here! 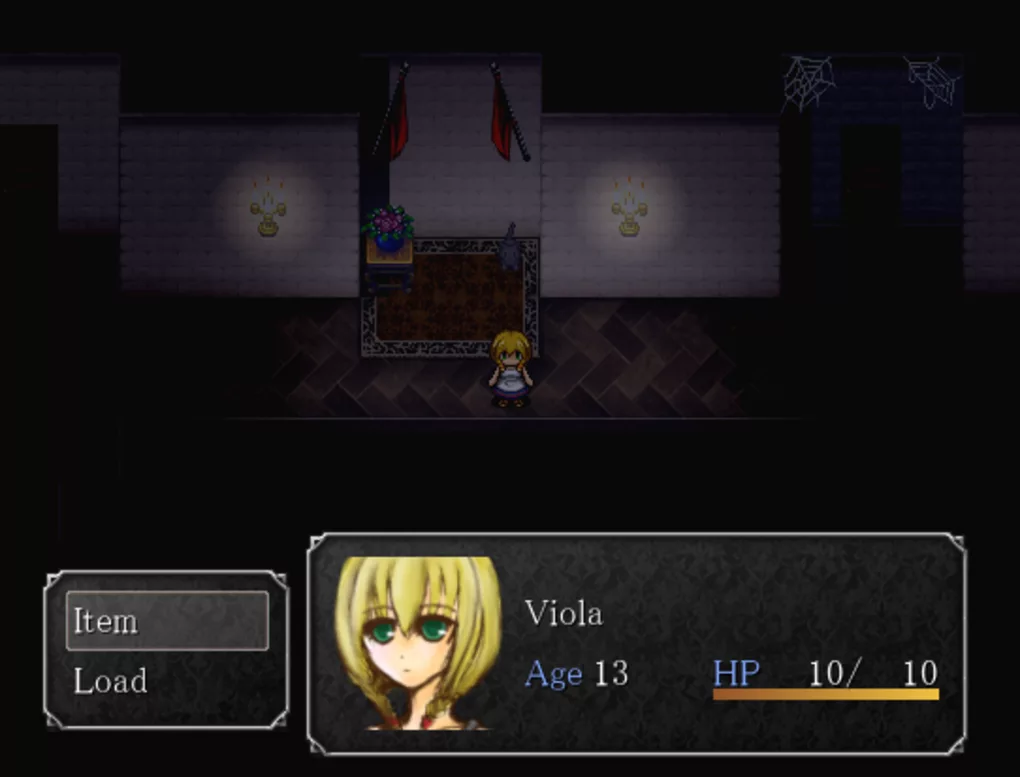 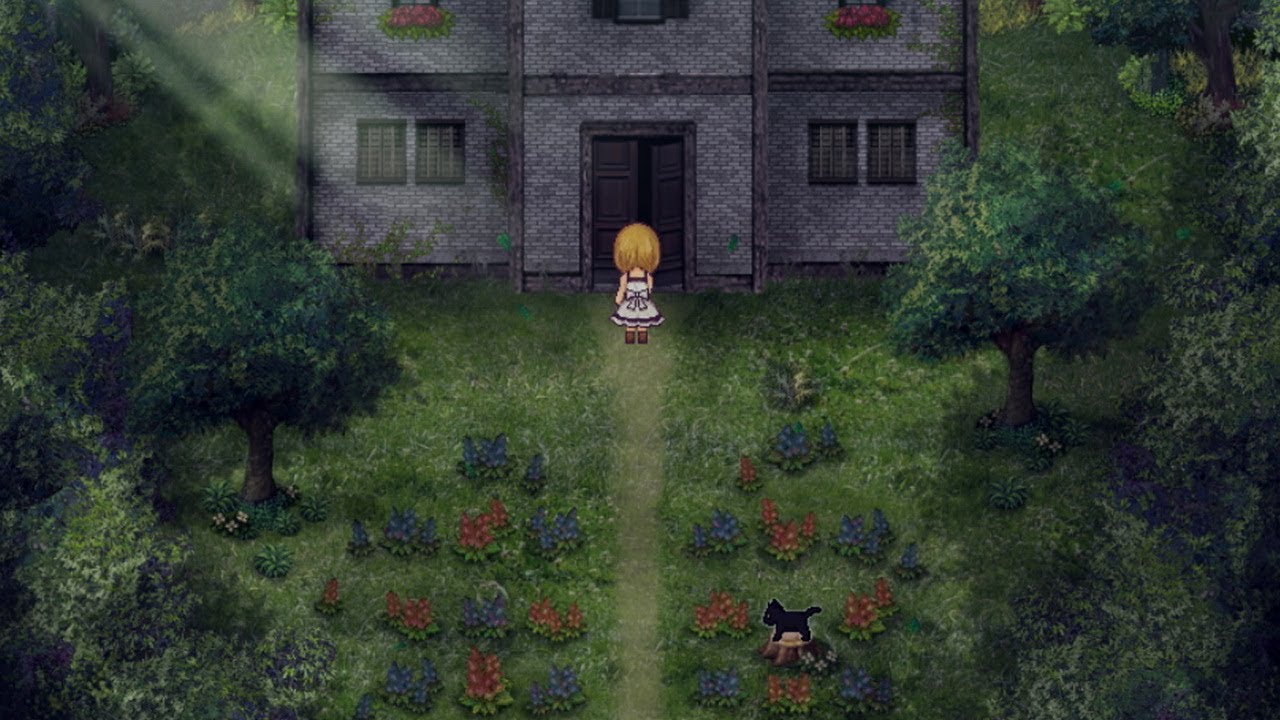 You play as Viola, a young girl who wakes up alone in the forest. She tries to leave but finds that the only way forward is through a mysterious mansion. Witch’s House is one of my all time favorite RPG Horror games. We played it on halloween for shits and giggles but then shat ourselves at the first chase scene.

I think where Witch’s House really shines would be how it presents its atmospheric horror. Whether you’re solving a puzzle or running away from an enemy, the house is always playing with your sense of survival. When people ask me to recommend an RPG maker game for its plot, this is the one I tell them to play as blind as possible. Once you finish the game yourself, you can also read the prequel that was recently released in 2019, Witch’s House: Diary of Ellen!

You can find more info + the download link here!

While most well known games in this genre are pretty old, there are newer games in this genre being made! Some examples of this would be Omori, Witch’s Heart, and Your Turn To Die, although Omori would be the closest to fitting this subgenre. We haven't played any of these ourselves, so we can't say much about them. Since I grew up playing RPG Maker horror games all the time I'm always glad to see more of them being made, and that the genre is still being kept alive. We're both happy to see that there are many ways to enjoy this subset of horror, and we hope you find these games fun too!

This article was created by rocktype & slimemagus