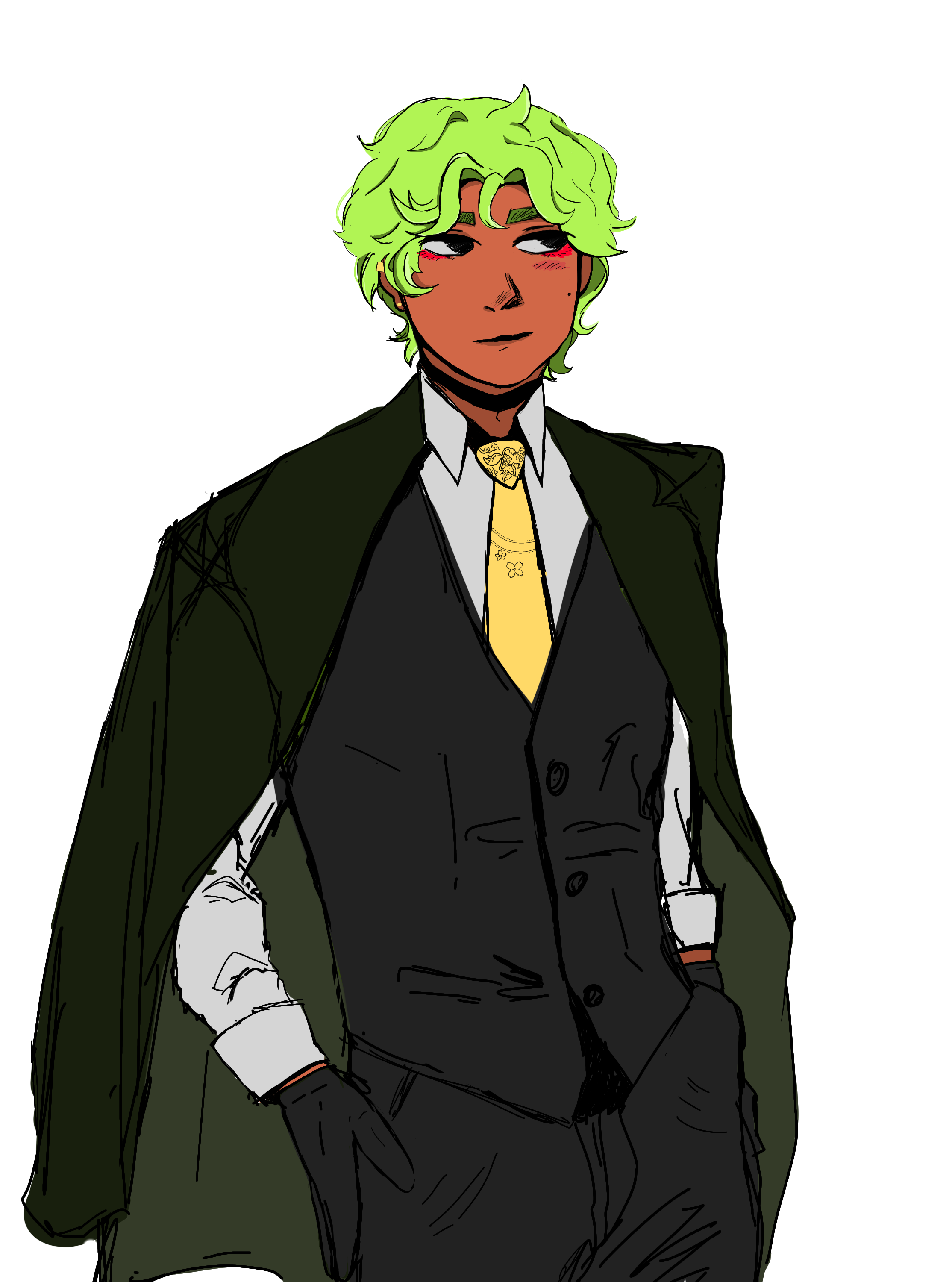 kon is the hottest guy in the building (REAL). he has naturally neon green hair, like the kind of green they use in yuppie psycho official art. his ass is huge <3 also he has a lot of back muscles and a big scar on the center of his back that looks like smth blew up there or something. his suit looks black but its a very dark green. he has a gold tie with a fancy flower design on it because if his tie was red he'd look like a christmas elf and that holiday doesn't even exist in the petaldive extended universe. he has a mole on his right cheekbone but sometimes we just draw it on his right cheek idfk

Kon is Gardenia's son, who is the most girlboss most business woman ever. Their other parent is fey royalty, so he was raised within the extreme LARP fey peerage system. He was raised by his mom and his grandpa because his parents were having the longest angst slowburn love a married couple could have ig. At 20, they left the peerage system and traveled alone for a bit to see the world himself. That was one of the times they met Thyme but to Kon that was their first time meeting. Eventually Kon decided to help out with his mother's business as interim ceo while shes out on vacation (she didnt tell anyone she just left a sticky note on the fridge that said back soon!)

AGLET: Kon thinks she's got a lot going on but she's very nice. He hopes she can cope better with...whatever she's got going on. When Aglet killed Garter that one time she went to Kon for advice and he was like "Oh yeah I've been there..." but then Kon realized being relatable was not helpful in that particular situation.

ALRIC: He thinks Alric is a bit of a weirdo but he's really fun. They know Alric is having a rough time, so they're thinking that having a good friend can help him get through it...and maybe they can be that friend O//O.

ARIAL: Kon thinks she has ISSUES but doesn't think he's close enough to her to do much. He's just watching from afar like "I hope you can be more honest with yourself" <3 Watching her do stuff feels like watching a kid fall off their scooter repeatedly and trying to smile but it looks like a grimace. One time Arial tried playing footsies with Kon in the jacuzzi but it jumpscared him so bad he almost desintegrated her and he felt so bad about it he made her a "Sorry I almost blew you up :(" gift basket after apologizing to her.

TARO: Taro is Kon's gbf the way he is also her gbf <3 You look at them and they're like frolicking in a field with their arms linked. They've been friends for most of Kon's life, they're each other's ride or die best arm right hand man everything. Also they make really good spaghetti together.

ARISA: They were in the same taskforce when Kon started working at petaldive in the HR department. They think Arisa is really reliable, even though she is kinda pushy about efficiency, and outside work they spill the hot goss <3

PEEBY: Kon found Peeby in this one crypt he fell into when he was a teenager (he's just that clumsy). So he had to find his way through this weird ass dungeon as a kid and at the end, where all the treasure was, there was a petrified orb. When he touched it, it unpetrified and PEEBY GET! Peeby was a lot fleshier than Kon expected it was kinda gross tbh.

ANTHE: He doesn't know much about Anthe besides that he's Mr. Durayin's partner. Kon thinks he's very interested in fireworks and "studying culture" so he's like "Wow! They're a scholar just like Mr. Durayin! :)"

DURAYIN: They met when Durayin visited the Summer Court to study archfey magic and woahhh Kon was also learning that! They met at the library and would study together. When Kon introduced himself he pretended to be just some librarian and was like "Nailed it :)" but Durayin could totally tell he was Not just a librarian. After Durayin went back home they kept in touch through letters, and originally they were more Magic Focused but eventually they'd just talk about their everyday lives.

GARDENIA: That's his mom <3 He respects her ambition and knows she's had to do a lot of hard things for herself and the people around her so even Kon, the worst workaholic ever, was like "You need a break". Gardenia dotes on him a lot so he gets a little embarrassed but he loves her a lot.