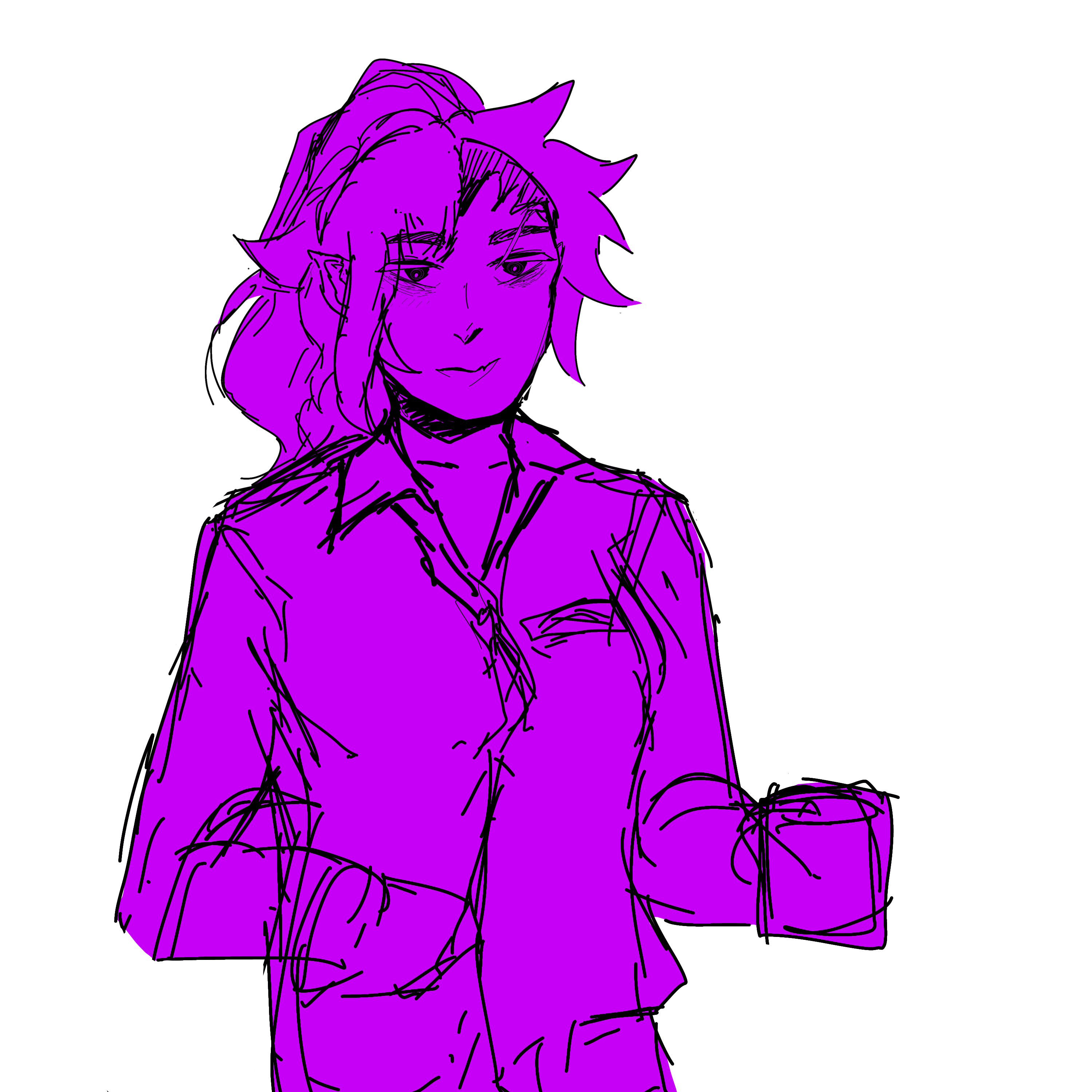 YOU ARE SMART - KATAMARI DAMACY

taro has long ube purple hair that's in a big high ponytail. she also has a messy sideshave on her left side because she fell asleep on a paper shredder once while it was still plugged in. he also got part of his left eyebrow shaved off in the shredder incident, and it left a scar starting a little above the eyebrow and ending halfway down his eyelid. but it's ok bc she still loves paper shredders...and what better way to show petaldive's employees the dangers of modern technology. she also has long pointed ears + fangs, a sexy 8 pack, and bulging muscles...she's impossibly fast and strong <3 ur welcome

Taro is the first and only IT worker in petaldive and everywhere so he's desirable in many aspects, oh and i guess as an employee. Kon and her are childhood besties and they met when Kon shared some food but fey have the whole thing with how eating their food fucks people up big time (but it's ok because kon's parents helped reverse it) and that was the start of their beautiful friendship. He doesn't understand magic for shit but is really great with technology, so he was offered a job at Petaldive once Kon started working there (she would have been in the building to hang out with them anyway).

Taro loves checking the weather app, she loves cold weather but hates it when its hot :(. He only really wakes up in the evenings (he's nocturnal). She assigns a lego set to each of her friends, and likes to go out with them to watch all the lego movies. Also he's very chivalrous like he wouldn't refer to himself that way but he's just so sweet and polite and makes really good tomato soup...the total package. She has huge muscles and abs and you can see it through the Office Attire. Just what does he to do to be that ripped? We may die wondering...

Also Taro's "office"/the IT department in general is the entire vent system on one of the floors of the building and the vents lead to different rooms it's pretty crazy but he likes it that way...the crawling is great for his yoga. She even has a room in there with a couch, a tv, a minifridge, and other amenities that he calls "Taro's Hole". It thankfully survived the time Alric set the IT department on fire, god bless.

AGLET: sexy office worker...very nice. lego assigns her the jellyfish because it's periwinkle.

ALRIC: Taro thinks Alric is a pretty cool guy :) Alric is good at cooking and the way through Taro's heart is through her stomach so they're best friends. Also Alric sends him stupid pics/vids of arial and aglet like "This ur girl?"

ARIAL: wow arial is so strong and...muscle...that's so cool. taro thinks they could spot each other at the gym and also do yoga together because arial seems very tense. idk he thinks she's so cool and also sweaty...it must be from all her work-outs.

KON: they are best friends 5ever. kon is taro's gbf <3

THYME: also taro's bestie, but he does NOT have the title of gbf it's more like haha you are dating my gbf.

ARISA: he thinks arisa works so much and is really good at working, he could never tbh so he's glad that he's friends with someone who's so hardworking. also arisa likes taro's soup <3

GARTER: Taro thinks Garter is so funny and vice versa. Garter thinks legos are weird but she wants to understand it, like clearly there must be SOME appeal if Taro keeps talking about it.

DENIA: Taro thinks she is so chill. Denia doesn't talk much.