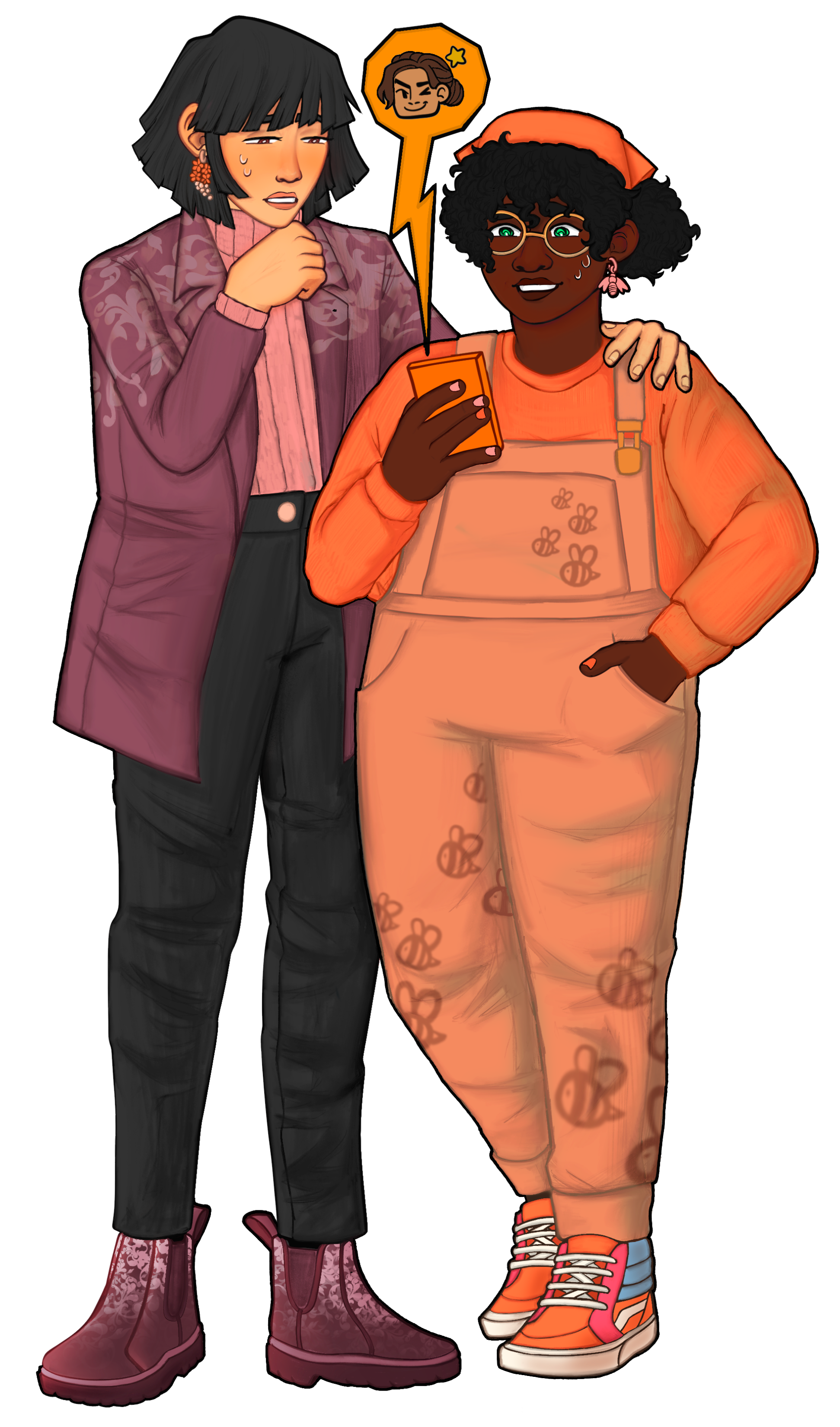 Meringue is ambiguously asian <3 with straight choppy black hair and bangs. For Meringue's style just look up academia fashion on pinterest and its whatevers on there with more colors and patterns. Their eye color is like. Red but not Kon's red it's more muted idk. Meringue's earring is. I don't know what kind of flowers but it's a dangly earring with like flowers and hanging ivy. Meringue's body type is tall and lean but she's as flat as a board god bless her though <3

Biscoff is black with warm undertones and tight curly hair. They usually pull it back into a ponytail but when it's down it's still slightly above their shoulders. Biscoff wears comfy clothes idk how to describe it I just look up spring fashion on pinterest and pick cute stuff with light colors. Their eyes are dark green that shows up super bright when the light hits them just right. Biscoff wears a rose gold bee earring and paints her nails different colors. Biscoffs body type is chubby and top surgery swag love forever

Meringue comes from a family of professors and scholars. Except her dad, Goro Majima (placeholder name i swear), who married into the family as a "retired" businessman who got bored and took a teaching gig at Helvetica as the school's new business management professor. More on this later. Biscoff comes from a wealthier family that owns a regional shipping and storing company. Neither of them were ever particularly interested in following their respective family's footsteps... so they didn't <3 Both of them were still overachievers when they first met though.

They first met 8 years ago at The Academy We're Not Going To Name Because I'm Lazy where they spent 4 years playing 5D chess with multiverse time traveling. Love is War pilled but Meringue didn't know they liked Biscoff till their last year there god bless <3 They ended their little mind games when Meringue needed tutoring and who better to tutor her than Biscoff? They had a popular girl in distress gets tutored by emo outcast moment except Biscoff is the popular one and Meringue is the Emo (was emo back in the day)

One thing led to another and... Yeah <3 Fast forward to freshman year of college and Biscoff is like "fuck being an overachiever im gonna get my degree and serve cunt at home every day from now on" and Meringue is like "im going to pursue a career where i can win debates for a living" <3 Walking out of campus one day when they stumble upon (construction sounds) (sounds of traffic passing by)

ALRIC - Meringue's thoughts only because Biscoff just thinks he's a little gay and pink; Heh... Not bad... But you're still a beta cuck-

ARIAL - They both think Arial is (construction sounds) and they (big truck honking). She's their (sounds of traffic passing through). All three of them (car crash sounds). Arial is more of Meringue's RivAl nowadays since post-academy Biscoff is less insane that is the only full sentence we're getting boys <3

LUCIDA - They've spoken very briefly time to time but Lucida loves both of them so much for looking after Arial. Totally thought Arial was dating them. Meringue and Biscoff are so embarassed about that part but they can overlook it <3 They're invited to Petaldive Thanksgiving and Yaoimas any day <3

COMIC - Seeing both of them makes him throw up (celebratory) He loves seeing gay people win especially gay people close to his loser sister. Meringue and Biscoff talk to him even less than they do Lucida but they think he's funny. Go gay boy go!

THYME - "Ayo there's a weird fuckin' guy under our table babe what!! They kinda ate though not gonna lie"