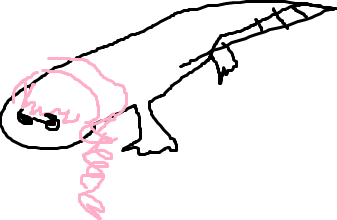 I really wanted at least one of those pink haired bitches in Petaldive it was a need and Arisa fulfilled that. Her starting concept was the strict boss but she was hot so it's ok if she' a little mean to you. I considered giving her the tight ponytail or high bun for her hair but opted for the long braid because those are fun to draw. Arisa is very fashionable and wears good looking, but not too flashy, clothes everywhere she goes (even to the grocery store). If she wasn't at Petaldive her appearance would really suit a successful insurance or real estate agent.

Arisa entered Petaldive and worked for a few years in the same task force as Taro, Kon, and [redacted]. In that short time she climbed to the title of Department Head with her obvious skill. Arisa is very goal oriented and hates cutting corners. While she believes she can do things better herself than leave task to others, watching Kon helped her learn that was a surefire way to deteriorate her health and most importantly: lose out on her break time. Arisa doesn't believe in overtime work. She either gets it done before the day is done or nothing else. So far she has always finished things within the day. Outside of work Arisa follows her own strict itinerary to destress for the next work day. Such routine includes her yoga, jogging, podcasts and audiobooks to listen to, brunch, the varied activity for that day, and much more. Self improvement is a trait that Arisa values greatly, so she often asks for feedback. Many are afraid to give it to her truthfully but one day someone was able to tell her how she can be too harsh on her coworkers. Since then she has been attempting to improve on her treatment of coworkers and subordinates (there's not much difference but they acknowledge that she's trying wawa).

AGLET: Scheming..plotting...planning... for an experiment. Maybe she can use Aglet to boost Arial's work proficiency like a carrot on a stick.

ARIAL: She has potential to be more but she lacks...something. Will continue to observe her.

KON: His skill is impressive but his work life balance is in shambles. This is my circus but whatevers wrong with him is much funnier and lightens my workload.

TARO: A perplexing creature. He's so capable yet chooses to be??? inefficient? Something is wrong with her soul.