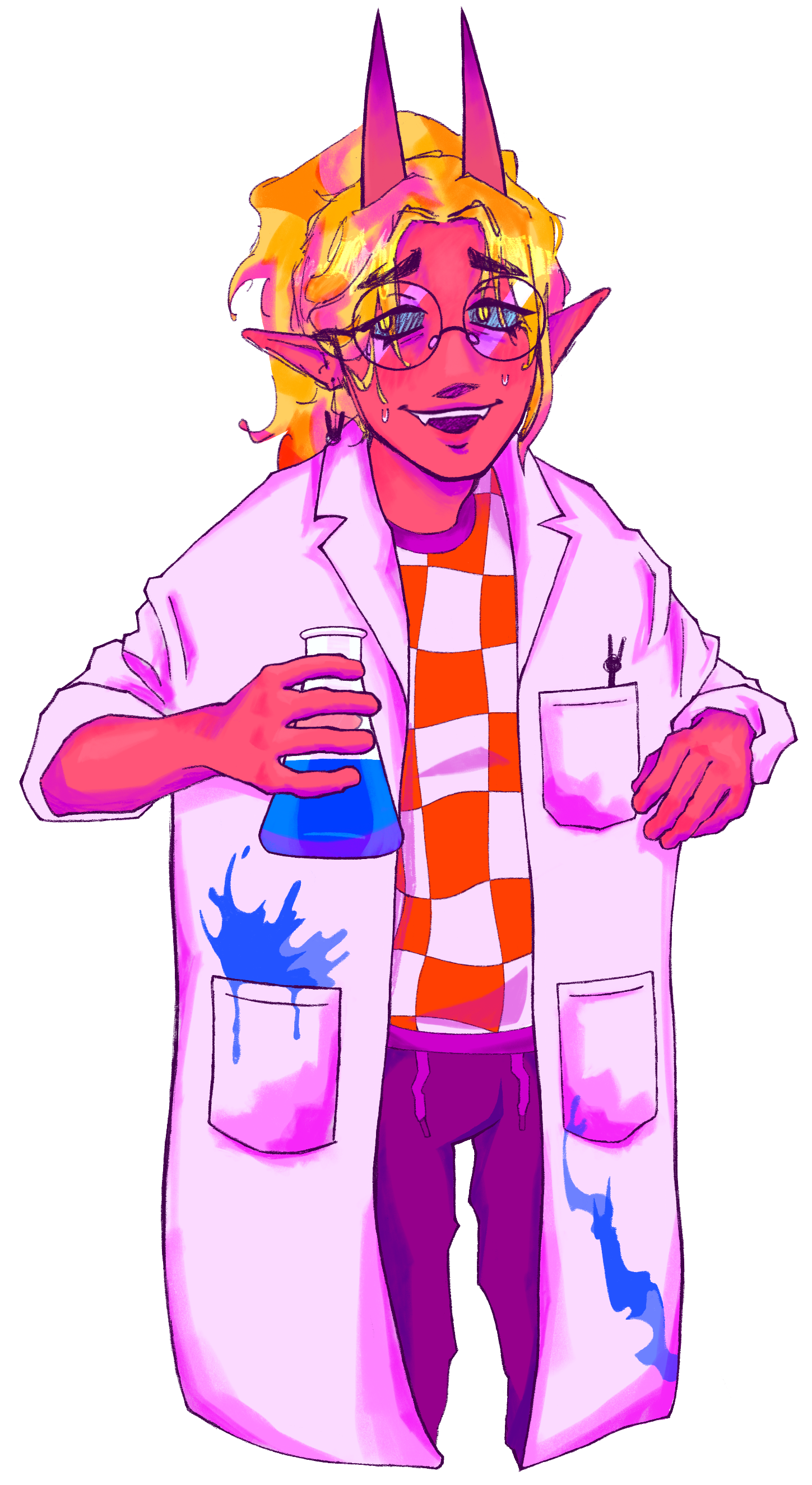 she's a lot warmer than alric, like her hairs yellow-orange and her skin is more peach. also she wears athleisure, not because she exercises, but because it's super comfy. she likes wearing bright colors. also she wears a dangly bunny earring, the other earring is a carrot - bunnies are her fav animal can u tell. she's sweating because she's holding a dubious amount of homonculi blood (which is worth literally billions of credits). when she's doing her research though she looks like wasabi cookie. evil mode activated, shes like >:3 but with too much blood on her. she's so pretty without even trying tbh...effortlessly beautiful <3

so bani has her full time job as an alchemist at some lab and they basically give her free reign to do her research once she does her actual job responsibilities (which she speedruns so she has more time to do what she wants). she's studying artificial life and homunculi but her general job is more prosthetics related. both involve transmutation magic and she's so fucking good at that it's unreal. she's also trying to get a doctorate she's insane. she's one of those bitches who strives for academic overachievement to compensate bc she has mad impostor syndrome. she stands out a lot (thanks grandpa one and grandpa fungus) but she tends to attract a lot more positive attention than alric and anthe (she's so lucky) so sometimes she worries that she gets stuff because of that rather than her actual merits. the truth is that her large presence helps a bit, but it was all her babey she just needs to believe in herself more. also she's really bad at lying because her emotions show on her face very plainly, but she's learned how to make people think things that aren't true by exaggerating stuff and using her tells to her advantage...improvise adapt overcome.

she gets awkward and nervous around people but she warms up to others pretty fast. normally she's very excitable and talks A Lot. and she's very curious (omg just like alric) so if someone/something piques her interest she will Investigate until she's satisfied. usually this means that she'll ask a lot of invasive questions and then be like "Oh, sorry!" because she doesn't mean to be rude, but she NEEDS to know. she's really nosy though oh my god. also since the stuff she studies is wayyy out there and very technical she can only really talk about it to durayin (who can follow what she's saying) and alric (who needs it dumbed down a bit but learned shit over time through osmosis). when she's excited it can be hard to follow wtf she's talking about, but she's gotten way better at explaining stuff to people who are learning. she doesn't have that many friends because her research tends to freak people out or just isn't something they can relate to, and she's holed up in her lab all the time theres like a couch and a mini-fridge in there. it's her version of taro's hole. bani's hole. also her lab is so nsfw (literal) that she has to People proof it whenever someone visits (and put on pants lol) she does NOT follow lab safety if it's just her in the room god bless.

AGGIE: she thinks aglet is nice they can talk about random office drama its so fun.

MANNY: he's her younger brother she kinda worries about him sometimes but she's glad that when shit happens she's the first to know. like literally she's his emergency contact lol. she knows that he thinks very highly of her and she thought it would wear off when they were both adults but he still asks her for help when it's an absolute emergency. she taught him some transmutation magic so he actually knows polymorph and has some knowledge on prosthetics making but transmutation was never really his thing. he was just doing it because she was doing it. anyway she's glad he's found his own magic thing but doesn't get why he's speedrunning shit so hard he's already doing so much. also they live together when he's not on a "business trip" and his room is basically his storage room for all the stuff he gets while traveling.

THE STRONG ONE: she doesn't know arial personally but aglet and alric both talk about her over the phone enough for bani to have a clear picture of what kind of person she is. she'd like to meet her though!

THE HOT BOSS: she hasn't met them yet but whenever alric goes out with them he'll tell her about it and he tries not to say too much but he sounds very excited u can hear the vein about to pop in his forehead lol gay

THE OTHER ONE: she thinks thyme is nice and wasn't giving in when she was trying to be nosy about alric. he passed The Test she doesn't trust mfs who openly give info about him to date him.

GARTER: ahaha she's like so funny and pretty...and she's a homunculus and bani's researching homonculi can i make it any more obvious? new lab partner + test subject + friend. WIN.

DENIA: she's staying at bani's along with garter while they both recover from being killed by the t(aaa)skforce lmao. denia doesn't talk much and bani respects that so hard.

ZACK: she also tried to help zack with the whole undead thing and she's not a necromancer but his samples were still useful in her research somehow <3 tbh she liked him a lot and thought alric was in love with him lmfao

DURAYIN: she likes talking to him about magic stuff because he is so wizard and smart. she also did an apprenticeship under him for transmutation magic specifically because she already knew that's what she was interested in from a young age.

ANTHE: she likes talking to him about whatever media they're both into. sometimes she watches shitty tv shows while she works so she doesn't get bored. also she tells him about her video games.