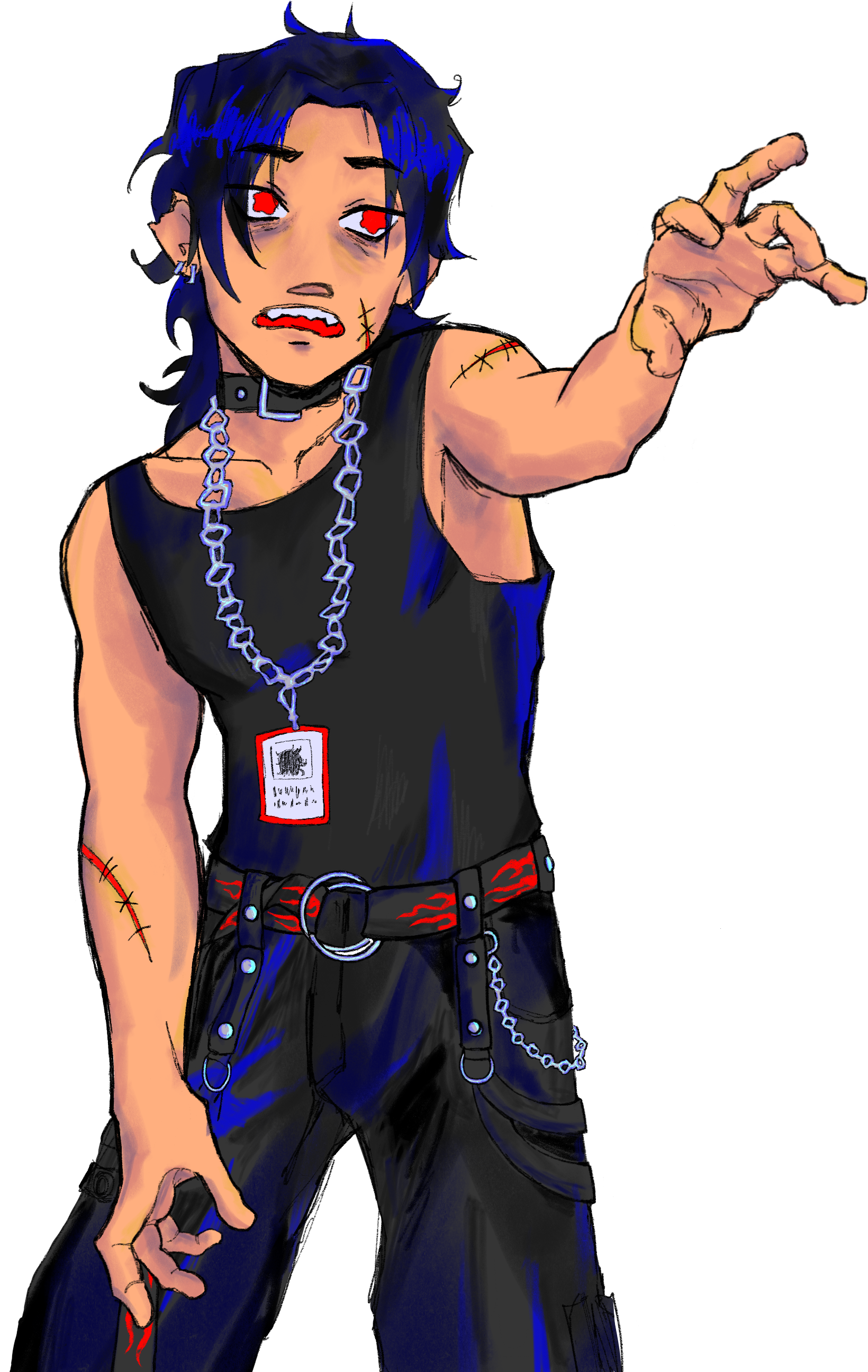 zack has longish black hair it ends between his shoulder blades but its layered like a mullet?? wolfcut??? ppl just call anything a wolfcut so idk anymore. his outfits are very yugi of yugioh. i got too lazy to make this a fullbody but he's wearing tripp pants that are tucked into his boots. he looks like he hasn't gone outside in months and he legit hasn't BUT he also just looks really sickly due to his Condition: undead. also he's got the ugliest eyebags but actually has a very normal sleep schedule, again bc of his Condition.

he's trying to gain muscle so he doesn't literally shred his arms as hard every time he fights monsters or whatever but he's barely started his gym membership journey. he doesn't actually have one lmfao can u imagine.

he heals pretty quickly so whenever he gets injured he can just stitch himself back up and then it's like it never happened :heart: but he usually wears bandages over his injuries while he waits for it to heal because he's still actively hiding that he is undead i was just too lazy to draw them lol.

the tip of his ear got torn off in an accident and he lost it before he could reattach it LMAO. but really i did that bc i wanted his dnd race to be unclear at a glance.

also he wears glasses because he has terrible eyesight it's not even an undead thing he was like that in life too i just didnt draw them bc idk what design they'd have. he has a glasses chain too because otherwise he'd misplace them immediately.

he has his petaldive visitors pass clipped to one of his chains rn too i only drew one chain bc i don't hate myself but he wears a few. he also has a wallet chain bc he'd absolutely lose his wallet otherwise. he loses his things easily can you tell

art: 1. regular ref; 2. zack but if he was drawn in what i imagine alric's art style would look like.

so zack died at some point but he's fine because he woke up as a ghoul! he used to remember who he was but his memories faded with time and by the time he realized there wasn't much he could do about it. in general his memory is pretty ass but he has been working to make it better. also he writes everything he doesn't want to forget in his diary just in case.

basically all of his bodily functions are halted until he manually does them he is literally manual samuel it's kind of awful but at least it can be convenient sometimes. he literally sleeps like the dead though since he can't do any of these while asleep rip. also the more hungry he is, the worse his senses get and the more mindless he is...if he's too mindless he'll just eat the first person he sees and then he'll go back to normal. in present time he was able to get help for that so his body actually acts alive and he doesn't have to control his body functions anymore so he can spend more brain power doing normal things. he's pretty scatterbrained but still an extremely good multitasker.

tbh zack is a very friendly and sociable so he's good at "making friends" but then he leaves so he never keeps them. but also if he wasn't constantly moving around he'd be very nervous about people finding out he's a ghoul so he'd rather not get close to people. he is also really energetic despite his frail and sickly appearance. he's the kind of person who flirts as a joke but when people think he's fr and start flirting back hes like oh no i have to go haha...

zack tried to live a normal life despite having to ocasionally eat a mf to survive but one day he got caught and he's more of a "leave no witnesses" kind of guy...so it ended up alerting The Raven Queen. she sent some of her reapers after to investigate what was going on. anyway whenever a reaper found him, he'd just fucking eat them so like...they had no idea wtf was going on since nobody who went looking for him came back LMFAO. but yeah at this point he just kept moving around and taking odd jobs because he didn't want to die god bless.

he took such a large bite out of The Raven Queen's forces that she stopped sending her reapers and just started getting the warlock equivalent of independent contractors - you can see where this is headed. he ate 6 of those and then finally...independent contractor number seven aka alric starbrand aka vesper aka mangus agnus was hired!!! except the reapers had so little knowledge on the situation that seven ended up meeting zack in unrelated circumstances and neither had any idea that they should have been wary of the other lol. they both ended up traveling together for about a year while they both did their odd jobs and shit and ended up becoming best friends 4 unlyfe :heart:

one of their odd jobs was being tag team pro wrestler duo The High Rollers i say "wrestle" very loosely bc seven uses magic plus it was more like the coliseum part of yakuza or the fighting cloud does with aerith in ff7r like that exact kind of arena. anyway to keep the gambling and casino theme seven was Jackpot and zack was Homestyle Buffet. their fans were collectively called the jackoffs and homeboys, zack picked the name. homestyle buffet was the speaker and hypeman of the two, but jackpot was more popular because he was their tactician and gave off cool and mysterious vibes. he wasn't there to try he was there to WIN bitch. they won so much they were asked to leave :heart:

when seven realized zack was undead he still didn't realize zack was THE guy they didn't even know if who he was looking for was even a person tbh it was that bad. for a while zack was actively trying to find out how he ended up a sentient ghoul bc every other one that was known to exist was a mindless husk so seven tried to help by asking his sister bani, who said this was way out of her depth, and his grandpa durayin, who actually made better progress. he thought there had to be some big reason or grand purpose to justify him still being around, but in the end he realized that he did not need a reason to exist he just does. also seeing seven live just because he really wanted to despite everything stacked against him did smth to him. also they were both on the run and had mad trust issues but had eventually earned each others trust so they did NOT wanna let each other go they're both bad at keeping friends rip.

eventually zack and seven realized who tf the other one was and were like oh shiiiiiiit. and they ended up agreeing to 1v1 each other, where the winner got to keep going and the loser got their ass sent to the astral plane. idk they both had really strong wills to live so it felt like the only fair way to settle it. anyway seven won and there were no hard feelings but they were both pretty fucked up about it just bc life sucked for both of them afterwards. actually mangus had tried to call and visit but astral jail didn't work like that and the raven queen was MAD at him :broken_heart:

anyway after like a year The Raven Queen was like "zack you have the mind of a mastermind to be able to elude us thus far..." and basically offered him a job to work for her as a reaper because he's like the most famous undead criminal who's still unalive. i guess they figured he'd be able to help catch people trying to cheat death? he didn't really care he agreed so he could be on astral parole lol. he's definitely hiding the fact that he was that infamous undead criminal though or else his coworkers would hate him so bad. also the raven queen is using her own magic so that people can't detect he's undead. now zack can finally visit seven i mean alric and catch up with him. it all worked out!

AGLET: so alric told zack that he had a job to create a distraction and ended up posting "cryptid photos" of aglet without realizing it was her. and then those photos ended up being linked to a missing persons case. holy shit bro. also she made him eggs and that's how he found out he doesn't like them so he feels bad :(

ARIAL: she has no issues bossing him around and he has no issues following orders. like yes i will pass you that stapler and write this info down for you you're so girlboss :D

ALRIC: zack's best friend 5ever!!!! despite losing memories often he still has a lot with seven in them. there's always something going on with him...that fucking guy

KON: he seems nice and has alric's back which makes zack feel relieved bc alric needs the help tbh

THYME: he also seems nice alric said he's literally god which is crazy. of course he'd try to date the creator of the universe

SEN: he saw sen when he was a contestant in that one cooking competition. he's into sen's rugged look, and they hit it off! more on this later.

MORBY: he wishes he had a personal trainer who is that cool. he asks him for workout advice.

ANTHE: he really appreciates how anthe tries to make him feel like part of the family, since he doesn't remember his own anymore

DURAYIN: he likes durayin but he finds him intimidating for some reason. like durayin looks at him and it feels like he is seeing into his soul and zacks like "how could you know me if I dont know me"

BANI: he was a little intimidated by her at first but alric swore she would be able to help with figuring out his whole undead thing and she was admittedly a bit out of her depth BUT she was weirdly nice to him. like the way ur grandparents bring out the good silverware bc you brought a friend over and they think you're dating even though you're not

RAVE: his boss the raven queen. he has trouble vibing with the other reapers bc they're all like "Zombies ate my parents wahh wahhh" so he basically eats lunch in her throne room which is the equivalent of a kid eating in their teacher's classroom bc they have no friends. she's honestly stunned with how presumptuous he is but what's she gonna do? kill him? throw him in astral jail? lol