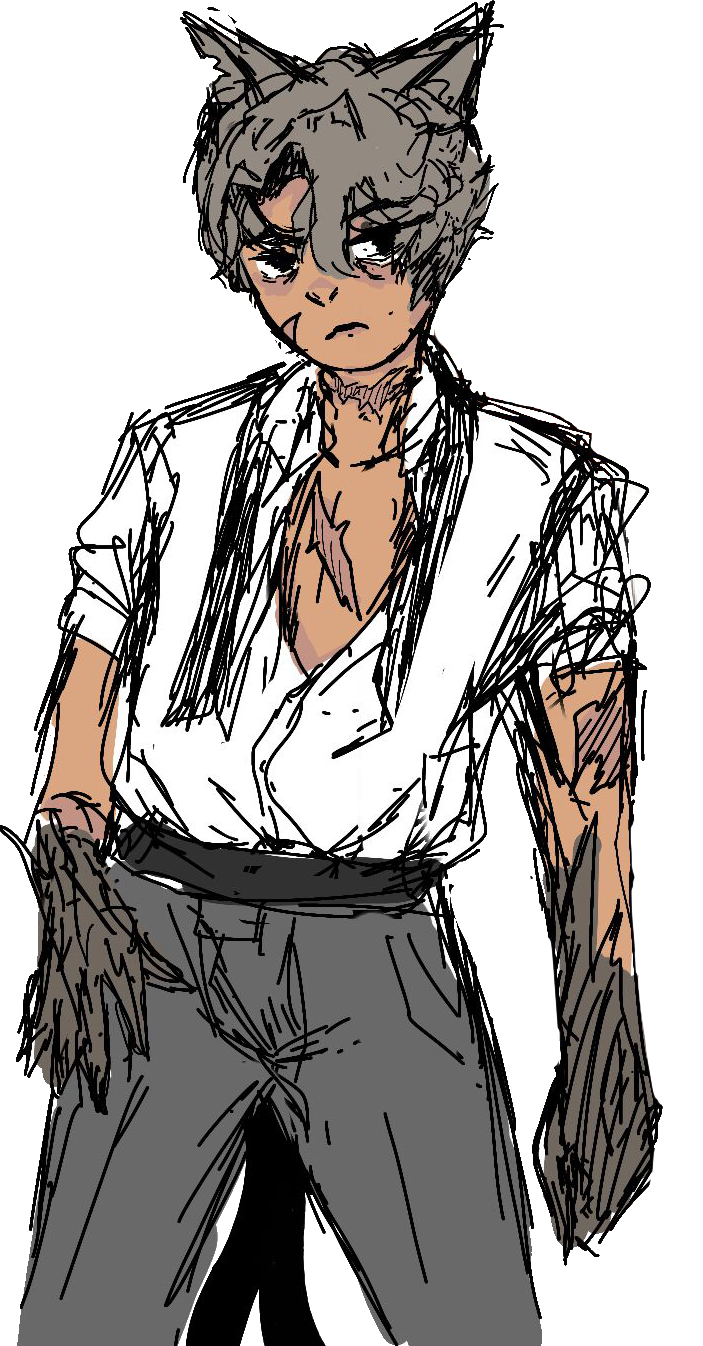 Sen's hair is a mix of light brown and grey. In his former line of work Sen was an assassin, but before that he did more bodyguard jobs. He has many scars on his body, which he gained all throughout his career as a bodyguard. His right ear is slightly clipped and he does not have human ears (only the car ears on top of his head basically). His hands and up to half his forearm have thicker fur and density. He has the cat paw human hand combo going on. At his current job he wears a turtleneck or longsleeves underneath his suit to hide his skin. His tail is double ended and splits towards the end. Sen's mercenary alias (Wishbone) was based off of this.

Sen was raised by his uncle and their partner after his dad succumbed to sickness and his mother died in her line of work. Since then, he has insisted on learning from his uncle and being included in the family business (a mercenary group). Sen climbed up from doing mundance odd jobs, bodyguarding, and finally the family specialization, assassination. Sen was content with his lifestyle and was content to do this for the rest of his life. However, a job involved with his ex at the time had gone wrong. After said incident, Sen's uncle as the current head of their group banned Sen from taking any more mercenary work for his own safety. Now Sen works a normal 9-5 salary job and is growing to love normal civilian life.

AGLET: Sen doesn't interact with Aglet too often but treats her nicely as a coworker

ALRIC: The FUGLIEST SLUT in the whole wide world. He doesn't do any of his work. But when he does it has to go through a million revisions, making more work for everyone involved anyway. Worst thing is, Sen can't fire him based off of bad performance because he was a "special hire". So long... peaceful office life.

ARIAL: Sen doesn't have any strong opinions on Arial either, but respects her for being able to do what he can't: tolerate Alric.

KON: Sen has worked with Kon many times to settle HR related disputes in his department. He admires Kon's kind disposition towards everyone he works with but can't help but be curious of what he's hiding under that smile.

TARO: Taro is really good at cooking and even better at making friends. She and Sen hit it off one time when Taro was sharing some of the food he cooked with people at the office.

THYME: Thyme has helped Sen keep his privacy and hide away from his obssessive ex, so they're a trustworthy guy in his book.

QUIZMASTER: Sen and QM are exes, but got along nicely in the time that they were together. However a dealbreaker for Sen is that QM didn't have a mouth. They're still good friends!

SEO: As department heads, both Seo and Sen have known each other beforehand. It wasn't until Quizmaster's wedding that they got closer and became good friends through a game of Candyland BTS UNO Cup Pong. After getting closer to Sen and learning of his BITCHLESS status, she has made it her personal mission to find Sen a boyfriend!

ZACK: he met zack when he was a judge for a cooking competition. he thinks zacks kinda cute and they hit it off! more on this later...

Sen's Uncle: Sen's uncle was the one to raise Sen from a young age after his sister and brother in law could no longer take care of him. He views and treats Sen as his own son and taught him everything he knew. He can be stubborn at times, but does what he can to take care of his partner and Sen. However after too close of a call during one of Sen's missions, Sen's Uncle cut Sen off from anymore jobs. He refused to lose his nephew in the same line of work that he lost his sister (Sen's mother) to. He disapproved of Sen's ex from the beginning and regularly sends potential suitor profiles through the mail so Sen would never go back to that ugly son of a bitch.

Sen's Ex: This guy loves fighting. Mercenary work is where he thrives. A "love CAN bloom on the battlefield" truther. Despite Sen's disinterest, he constantly tries to contact and convince Sen to return to his former way of life.